By the time we arrived it was getting on 11:30am and the place was flooded. To give you a frame of reference, Paris produce markets usually setup by 8-9am, really get going by 11am and wind down around 1-2pm. I'd already read a few enthusiastic posts online by local bloggers, encouraging people to experience this colorful produce market. Because in the throes of so many people, that's all you can really do. The general recommendation was to start at the beginning and let the energy pull you forward like a tidal wave (or a raging river), getting a bit jostled and bruised along the way, but hopefully not splayed out on all fours by the end — and hopefully with your fruit still intact!

The mouth of the market, at the Belleville stop, was filled with vibrant West African patterns cut into oversized moo moo shapes, glittery pumps, and dirt-cheap Converse knockoffs. At one stand a group of women were lined up trying on colorful headscarves and giggling to one another. The stall owner beckoned me over using the market showmanship I've come to expect in India and parts of Asia — she batted her eyes my way, broke into a wide grin and motioned with both hands. In a Parisian farmers' market this behavior would be quite forward. But this is not Parisian Paris. The other day Isabelle, struggling with a way describe Belleville said simply, "It's different." That it is. But Paris on the whole is as varied as any global metropolis. In New York it would be completely natural to rise out of the subway and find yourself in Chinese or Greek Queens. Why not here? I smiled at the vendor but walked on, not quite ready for my first sales exchange of the morning.

Without much ado, we put ourselves squarely in the stream of people and began. Stalls lined either side, leaving enough space comfortably for two people with market pushcarts to pass each other in opposite directions. True to its reputation of having fantastic deals, the music of sales rang out from start to end, mostly from North African/Middle Eastern Men. En euro! En euro! En euro! or Yalla! Yalla! Yalla!, they called, and sometimes Yalla! En euro! Yalla! En euro! Yalla! En euro! for variety. "Hurry! One euro! Hurry! One euro! Hurry! One euro!" Some syncopated the beat of words until they were just urgent sounds, hypnotizing the crowd into a buying frenzy. In this environment, sentences lost meaning. Instead, the vendors relied on the theatricalities of tone, volume, repetition and sweeping gestures using their whole body. Quatre pièce, en euro! Quatre pièce, en euro! En euro de quatre! En euro de quatre!, they called, with their hands outstretched in front of them.

At this point we're well accustomed to the dance of buyer and seller. But rarely have we seen such a varied group. From what little we could even discern from the myriad of faces, the crowd was a mix of French, West African, Middle Eastern and North African, a few Bengali or Indians, Chinese, Thai and we two Americans. 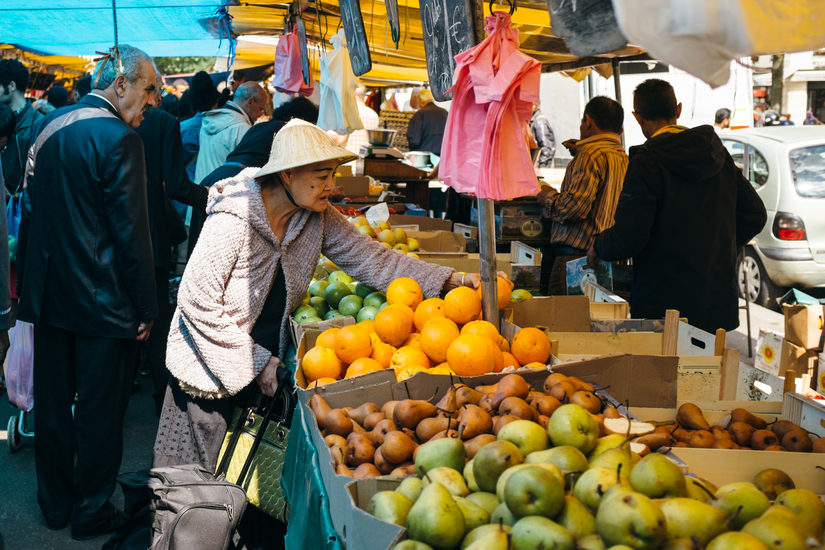 Each stall took up a few tables, and each one had at least a few vendors to work from end to end. As one vendor's chant died out, another's began. Propelled forward with the crowd, we walked past a dizzying volume of (mostly) fruit, at least at first: the temperate apples, plums and pears; tropical mangoes, bananas, kiwi and pineapples; and the figs, melons, and tomatoes of drier climates. From the looks of them, it was obvious that the origins of the foods were as widespread as the people. Sure enough, in my pursuit for some cheap avocat, I found tiny Haas from Spain, big, circular ones with a reddish skin from Kenya, my favorite Peruvians palta, and larger, more mottled Haas from Mexico. All were selling for 1€ -1€ 50 for 3, which is 1/3 the price of our local shop. Even though I grew up with supermarkets, these kind of travel distances boggle my mind. 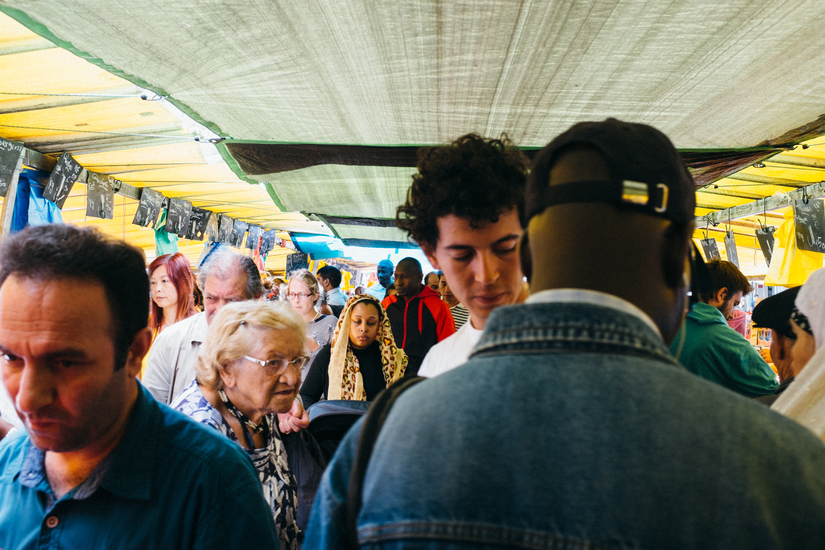 If a vendor caught even a sideways glance from a potential customer, they beckoned Madame! Madame! Madame!, until the woman sidled over. An older woman in a headscarf who had been eyeing some bananas made to move on. The vendor called to her and waved a bunch in her direction. She shook her head, which only egged him on, all the while speaking rapidly in a pitch we imagined sounded like, "Yes! Yes, you need them! Yes, you can have them. Yes, yes, yes, take them! Madame! One euro! Take them! One euro! Yes, Madame!" She turned him down once more and then finally gave in, grinning and handing him a euro in exchange for a ripe bunch.

Like many ethnic markets, the vendors seemed to be buying from the same suppliers, their value determined by cost and not quality. Amidst the fruit were onions, potatoes, chilies, and an enormous, pale, skin-colored squash with orange flesh. There were stacks of eggs and poultry, too. But this was one market where my focus was on faces, not fruit and veg. 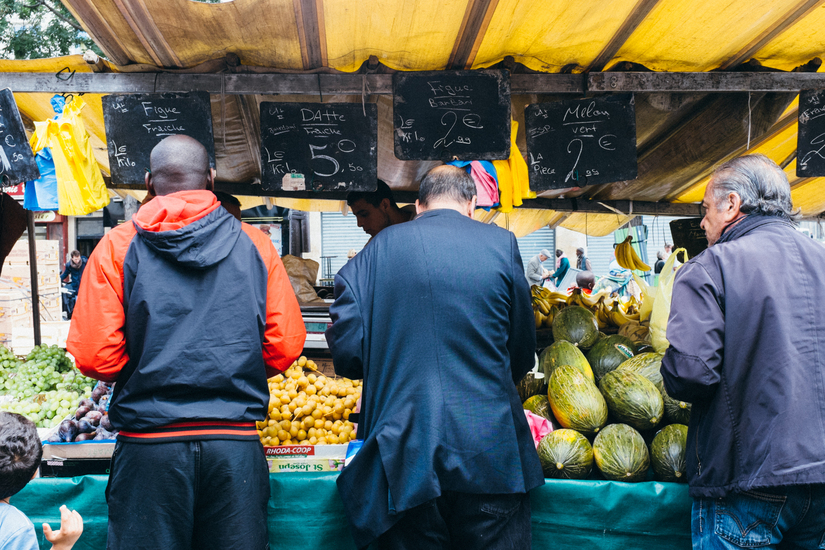 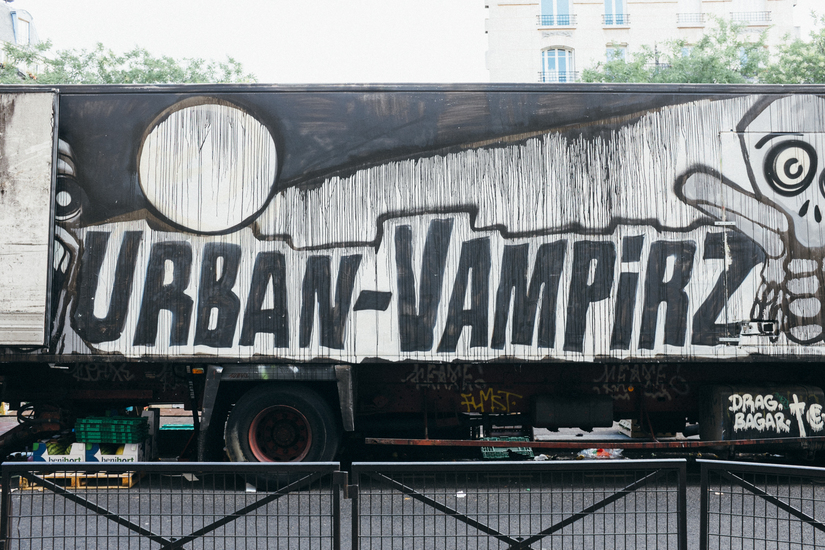 Halfway through, we came upon some fishmongers selling exceptionally fresh-looking fish at bargain basement prices. A young child came up and a Chinese man asked in French, "Where's your mother?" Not a moment later his mother appeared. The man smiled broadly and greeted her with sawatdee khap, followed quickly by konnichiwa with as much zeal as someone handing over a business card.

At one point I pulled out my camera and made to take a few shots. This was immediately met with furious headshaking and waving of hands, almost bordering on anger. I handed the camera to Matt, who received the same response. True, ours was the only camera in the crowd, but I couldn't help but wonder what made the men so uncomfortable. 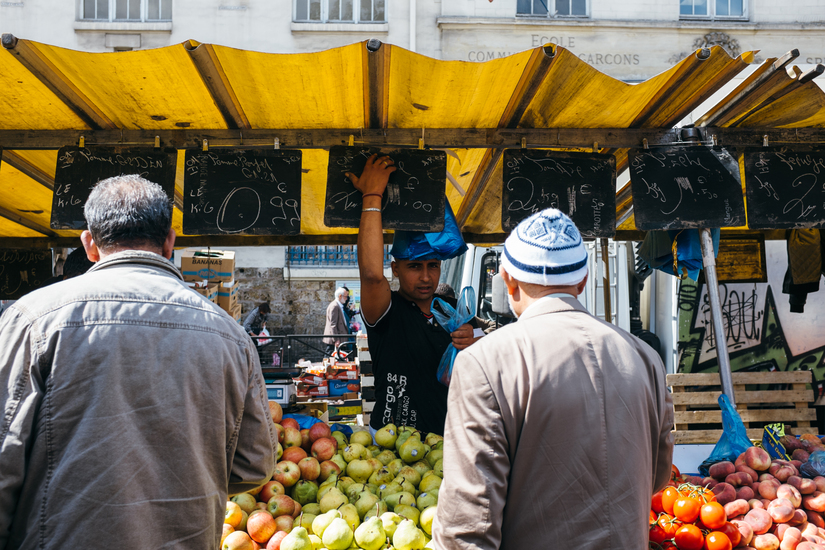 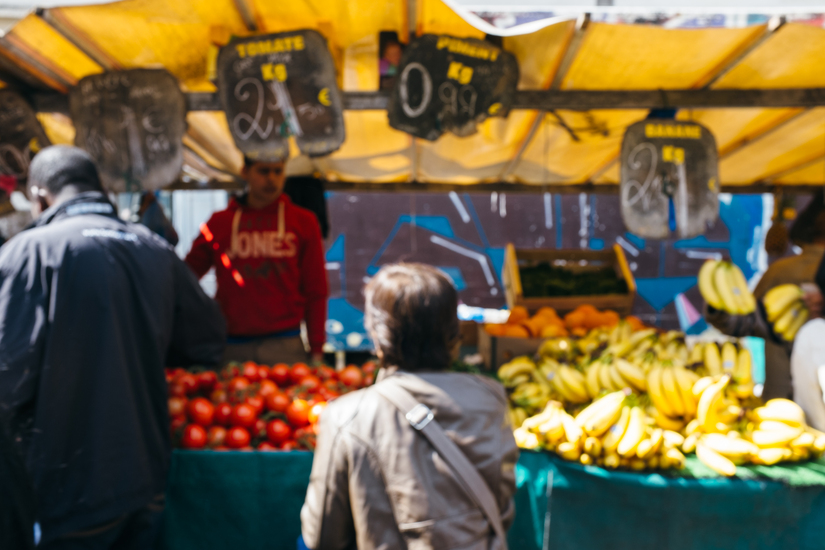 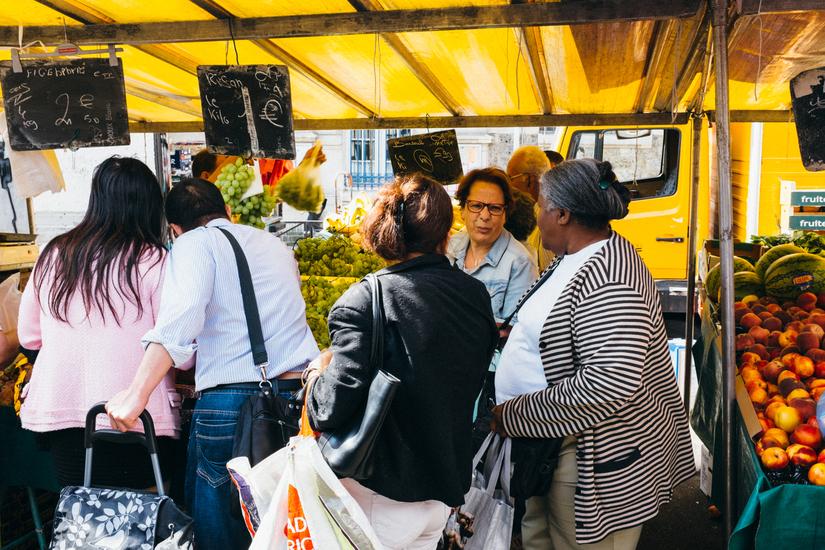 As we neared the last third, the crowd began to thin out and the produce became more varied — cruciferous, kale, turnips, and heirloom tomatoes, delicate shallots and fresh garlic were on offer. These were sold by quiet Frenchmen who called out softly, Bonjour! Messieurs-Mesdames. Comment ça va?, an indication that we'd made our way through the meat grinder and out the other end! 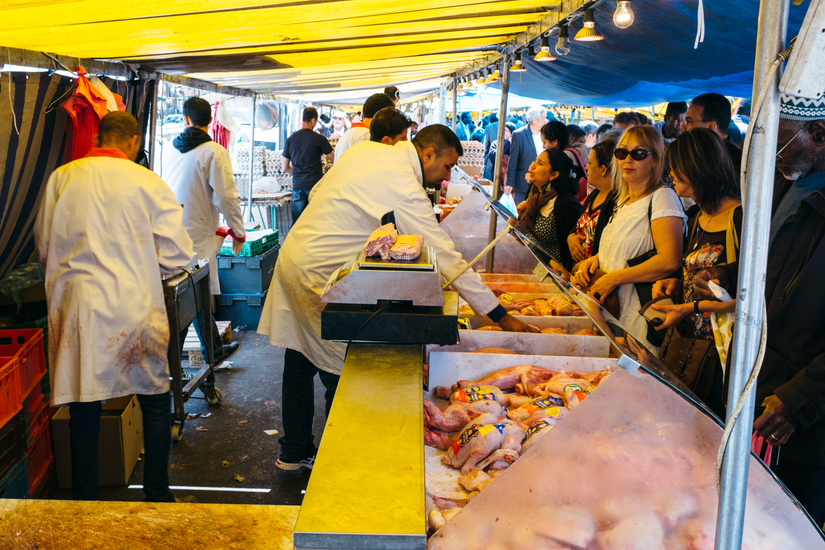 We had three avocados, a pile of bananas, and two beautiful reddish mangoes. Of course, we hadn't handled our fruits as delicately as we should have. The bananas ended up a snotty, smooshed mass in the bottom of our bag. Seems we need to invest in one of those beautiful woven market bags we keep seeing. Once we reached home, we pureed the bananas and stuck them in the freezer for a sunny day (here's hoping!).