We've been lax so far in looking up weekend events because, for once, we happen to live near friends. It sounds so wonderful I'll say it again. We have friends in Brighton. Every once in a while we get a call or text from Char, similar to the following: "Naked bike ride today midday at The Level." At that moment we consider ourselves well-informed.

While local rags and the internet are a good place to find out what to do, friends are, well, they're friends. I like to think of Char being tuned into this actual, physical beat that's shaking the sidewalks in Brighton. Here we come, two silly, lumbering Americans, obliviously walking around town. We pop into local shops and pubs, saying "Hello!" to everyone and occasionally giving them travel advice on their upcoming visit to places like Daytona Beach, Florida. In the US we know nothing about Daytona. But in England (and every other country on earth, I suppose), we're experts. We've witnessed the existence of Daytona Beach firsthand. We can speak freely — and with authority — on topics like the weather in November and whether it's an alright sort of place for a Brit to go on vacation.

Saturday morning was headed towards a visiting-the-shops sort of day (this time to outfit our new digs!) when Char gave us a call and reminded us about the Kemp Town Carnival, Brighton's largest free-fun-for-all festival that takes place along St. George's Road.

In a way, Brighton reminds me of Portland, OR. And not just because of their enthusiasm for DIY crafts and naked cycling. It's a big enough town to have some diversity, but it's also small enough that you know when there's some revelry afoot. In New York Radiohead could be playing free in Central Park and you wouldn't know it unless you were standing in the park. In Brighton, you just follow the crowds in their vaguely circus getup, gold lamé and face paint, or Indian-esque pajama pants.

On Saturday, we followed them over the hill to Chris and Char's and, outfitted with strollers and Bjorns and little kiddies, on to Kemp Town. As Chris said, we were on a mission to get there and walk slowly, almost painfully. The start of the Carnival looked like any sort of crowd waiting for a parade — there were horns and open containers and people sitting about on the sidewalk. Except this parade is more of a people's walk — showcasing an individual's colors and affinities — fueled by various pulled meats, cake, and beers. Basically, an enormous block party. 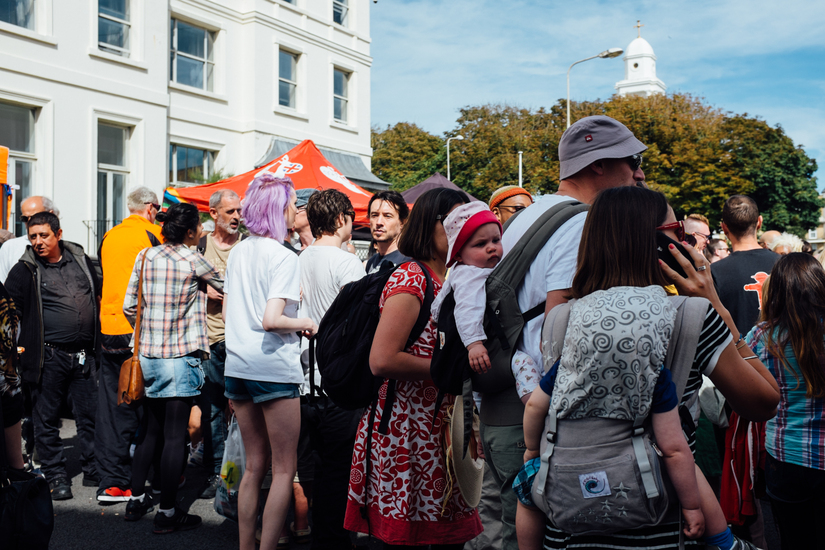 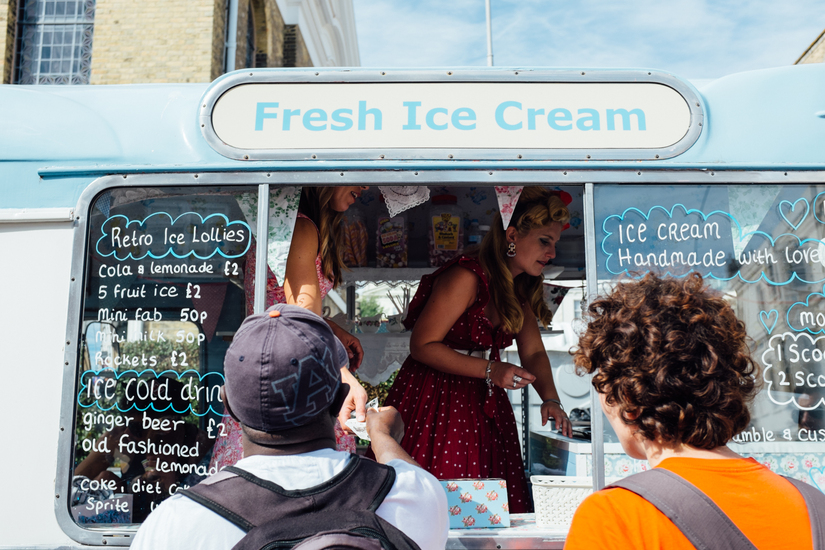 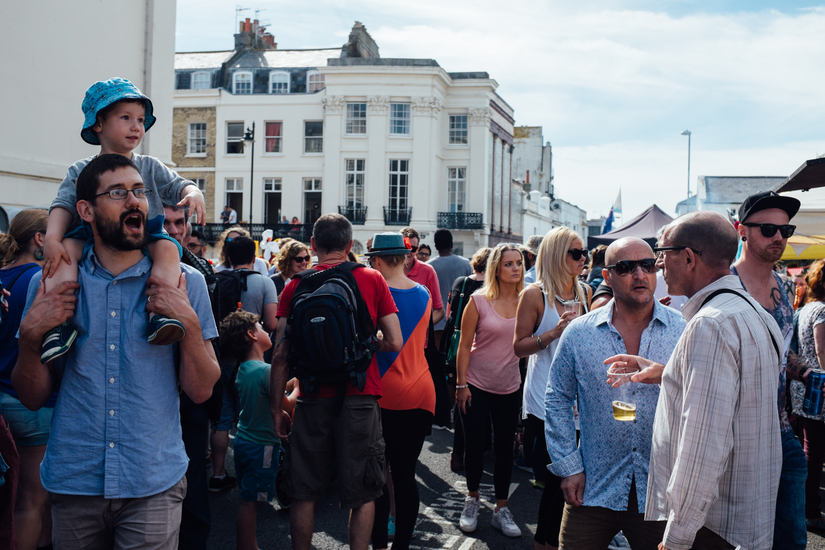 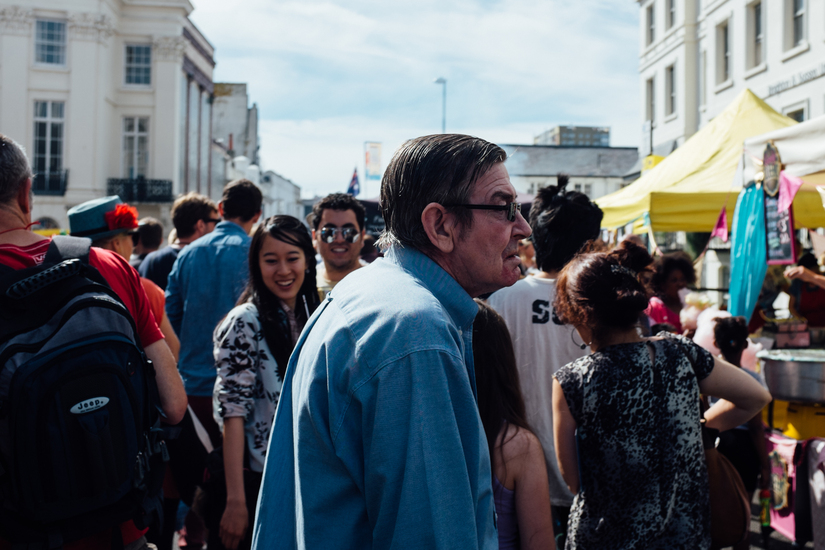 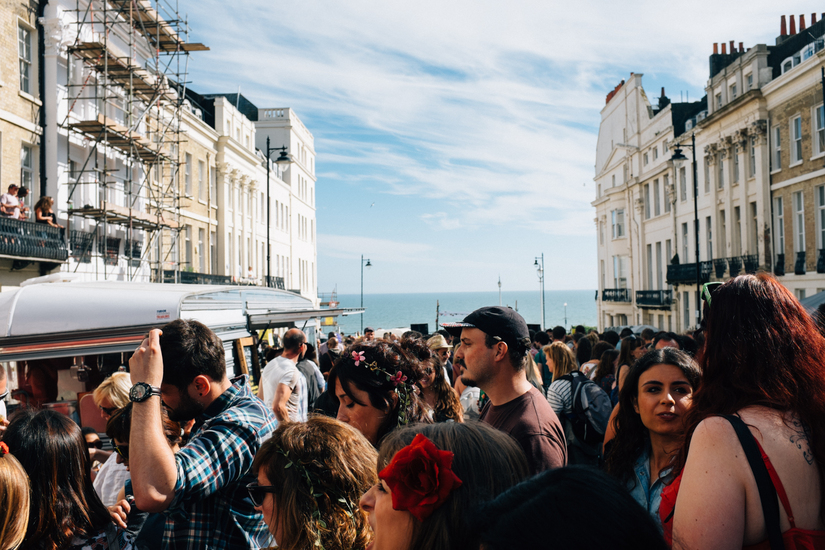 We shuffled our feet and tried to focus on what was happening around us, rather than our stationary position. While the men had donned their everyday uniforms, many of the women were in colorful sundresses and unis, their faces painted and hair crowned in fake- and wild- flowers, nodding and stamping their feet.

At one point, Char and I got separated from Chris and Matt and shared a tense moment in a dense crowd. She with Adam on her back, so cleverly concealed and in such a deep state of nap that he could have been mistaken for a backpack. I was behind her, standing erect to block hysterical claustrophobics if push came to shove. A remote possibility, yes, and maybe even more remote in Brighton, where parents bring their kids to the party.

I, for one, like the part of Brighton where youngish families aren't banished to the suburbs to fuss over their lawns and other such domestic tedium. I like that strollers are an accepted part of life, even if they do tend to muck up an atmosphere when they're out in storm. And I especially don't like all the codgers out there giving young mothers a hard time on the city buses. Mothers (and fathers), for their part, just need to remember that strollers are a kid transportation device, not a weapon. But that's another story altogether.

We breathed in deeply and eventually came out on the other side, seriously wondering if this neighborhood block party hadn't outgrown itself. And then the end rushed up on us in a blur of horns, pulled pork and popup pubs. Chris and Char made their exit towards the beach, while Matt and I decided to take another kids-free pass. 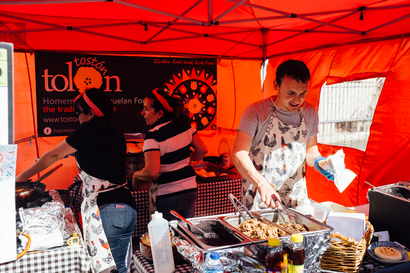 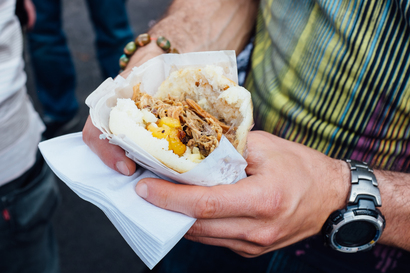 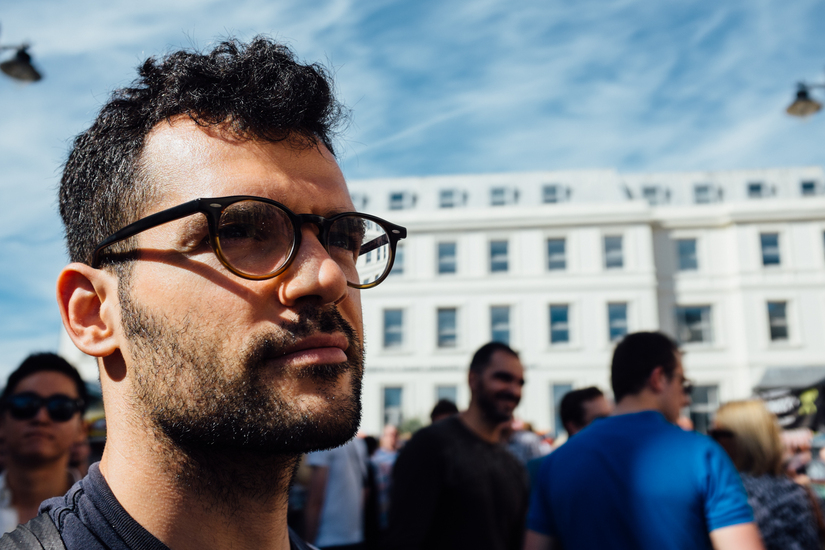 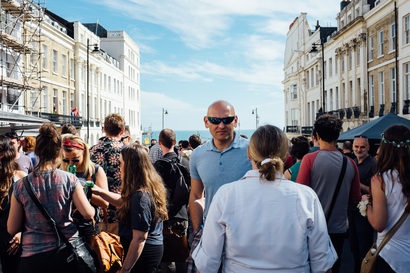 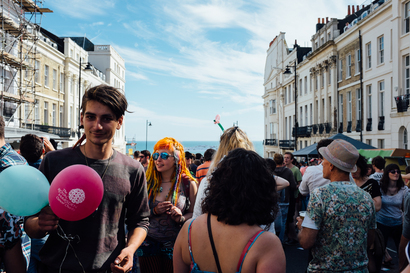 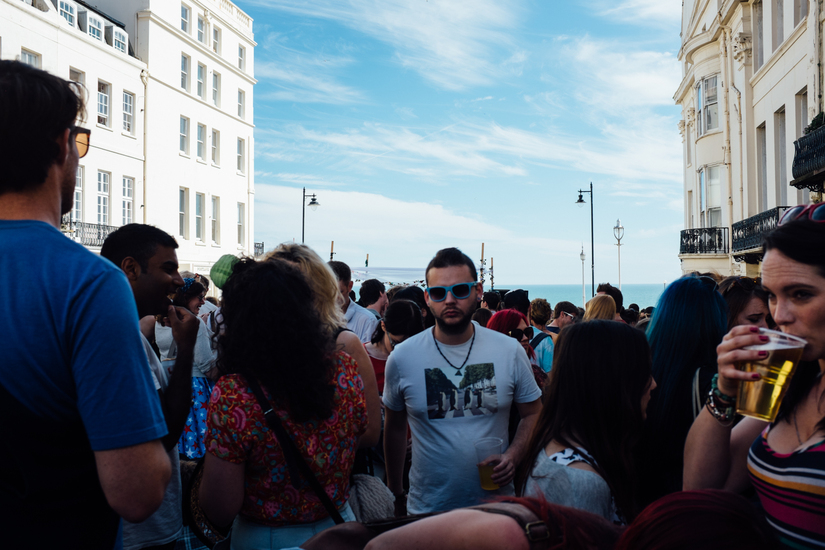 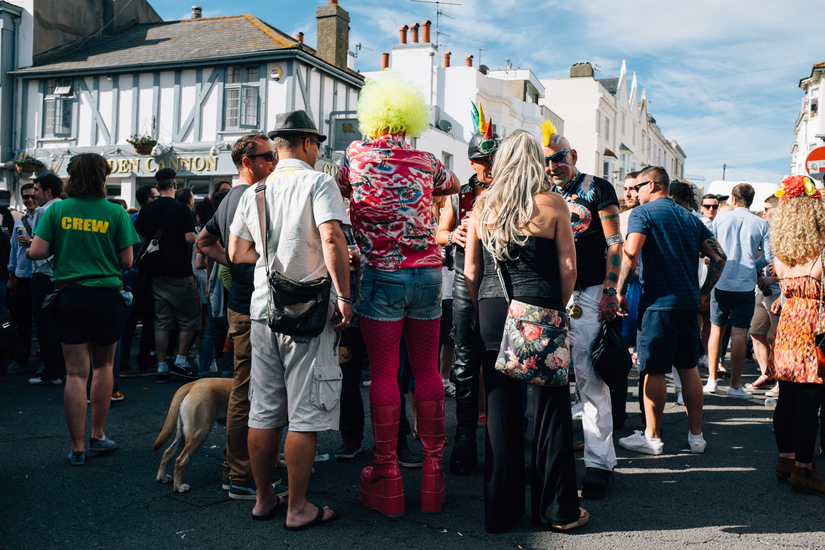 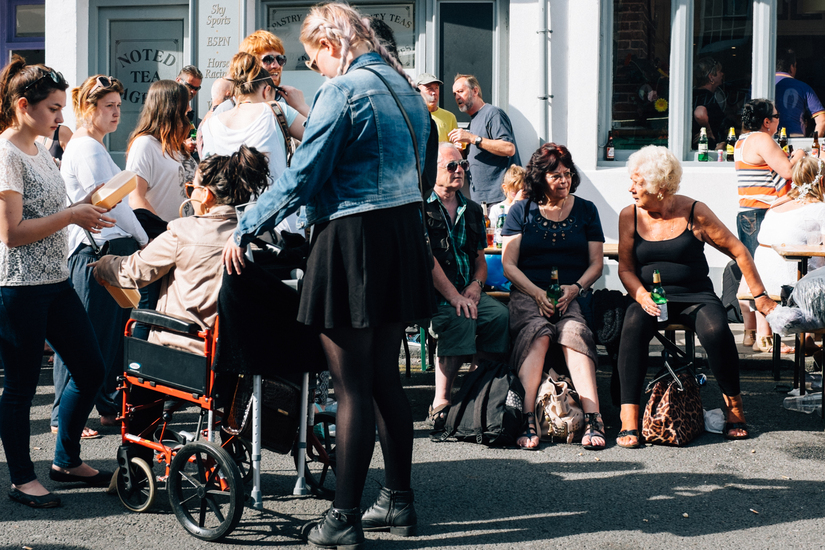 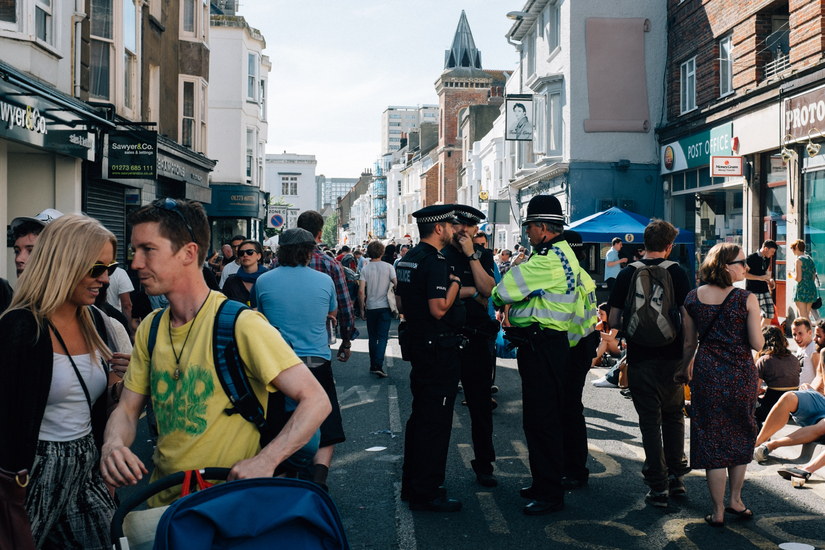 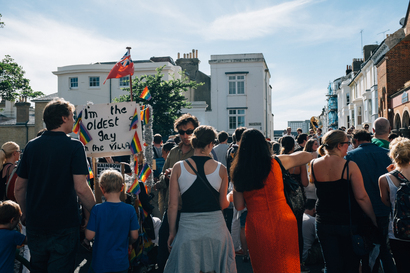 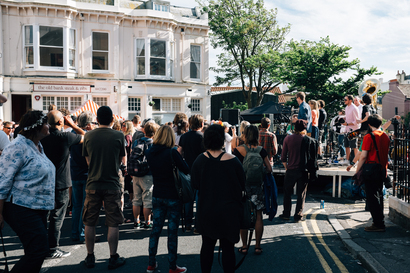 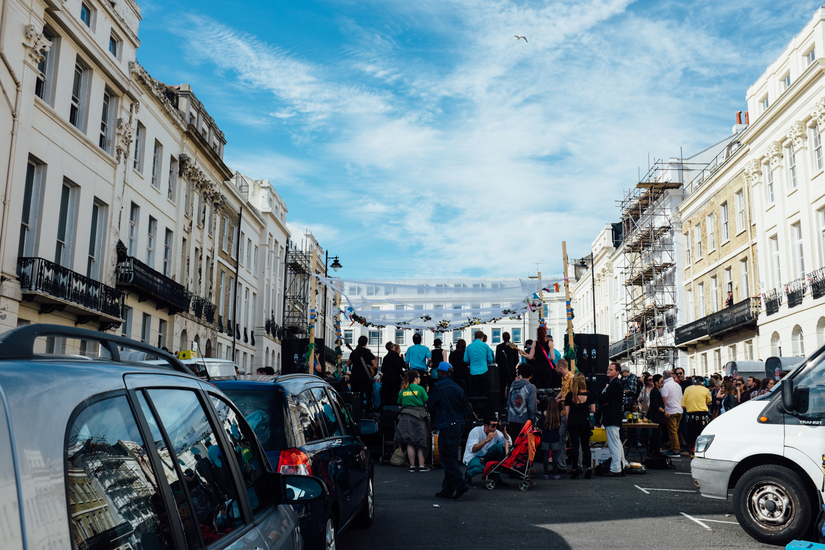 Walking back up St. George's I felt momentarily lost in the sea of people, all vying for a good time. Once I looked more closely, though, I started to notice the same faces. Some were in full regalia and easily identifiable, but some were just interesting faces I'd observed earlier. And that's how, two weeks in, Brighton started to feel ever so slightly smaller.

We danced about, snapped some shots, and shared an incredible arepa. I would like to say we listened to some music, because that's what this Carnival was purported to be about. Really, the music just floated in and out as we walked, a little horn here, a little reggae there and a crush of people stepping in time. One person's background music is another's foreground music, I suppose. As Chris succinctly observed, it was "generic upbeat festival music — Ska, Latin, Balkan, Reggae, 50's, Gypsy and Funk."

As the throngs of people started leering at one another and the afternoon chill was coming on, we made our exit. On our way out we picked up some succulent ribs to finish off our porkfest.

Most everyone we meet in Brighton seems to love living here. That sense of community comes through in an event like this, where people donate their time and artistry for a shared experience. Yet while the Kemp Town Carnival is a celebration of creativity, the record 25,000 people may have also been drawn by another headliner: the sunshine. Happy summer, all. 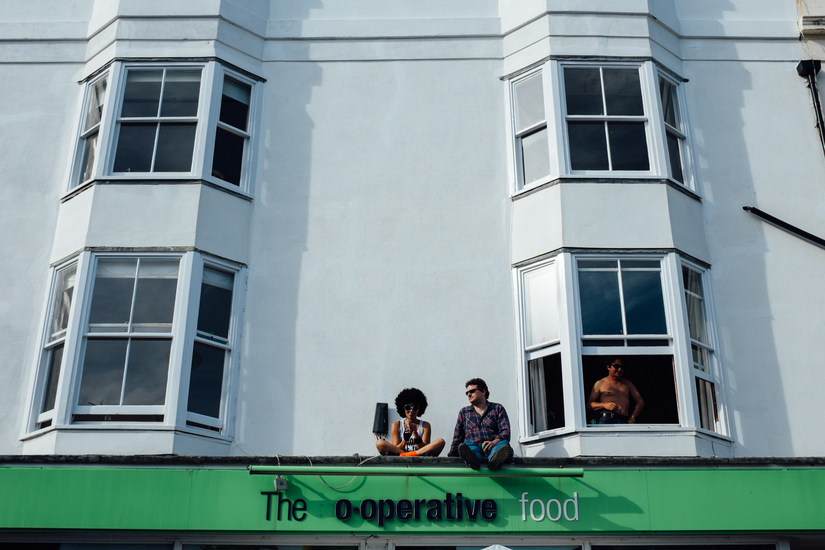