One is called to the priesthood through divination. As soon as a child is born, a máma consults the Great Mother by reading the patterns that the stones and beads make when they are dropped into water in ceremonial vessels. Those who are chosen are taken from their families as infants and carried high into the mountains to be raised by a máma and his wife. There the child lives a nocturnal life, completely shut away from the sun, forbidden even to know the light of the full moon. For eighteen years he is never allowed to meet a woman of reproductive age or to experience daylight. He spends his life in the ceremonial house, sleeping by day, waking after sunset to cross in the darkness to the máma's house where he is fed. He eats twice more through the night, once at midnight and again ... View Post »

Things you can't ship to Peru

The saga of shipping a few things to Peru continues… We found the following list of prohibited items on the USPS web site. Fortunately none of what we are shipping falls cleanly into any of these categories.

Usually a country blocks the import of goods that are dangerous (fireworks, guns and ammo, all things radioactive…) or those that would compete / crush their domestic equivalents (e.g. clothing, electronics, precious metals, etc.). To some degree this tactic is understandable, and no I don't know the sizes of the markets for these products, but c'mon, you can't ship used clothing, playing cards or sound playing devices?

Which are your favorites? Ours are highlighted in bold.

We've been witness to a ton of canned experiences since we got to Cusco. One of the most dangerous and highly coveted is that of drinking Ayahuasca with a shaman.

Today I overhead such a sale while spending the afternoon at SAE. A woman in her late 40s who works for a company that gives Ayahuasca experiences in Cusco had just finished closing a sale.

Ayahuasca is a brew made by mixing a jungle vine with leaves of a DMT-containing species of shrubs. It's Quechua for "spirit vine." It's commonly used by shamans for it's hallucinogenic properties. It's said to be a more introspective experience and shamans use it to locate remedies with which to heal their patients. There is a long tradition of Ayahuasca use with many tribes of the Amazon.

Now is not a good time to travel to Puno. We certainly want to spend some time there. Lake Titicaca and the famous high plains of Peru are where many alpaca, vicuña and llama are raised, and there are many local indigenous cultures. One of those groups, the Aymara, are protesting the mining concessions that have been granted to the Canadian Bear Creek mining company. The demonstrators oppose all mining in the area, which they say will pollute Lake Titicaca and destroy fishing populations. They have asked the national government to completely ban mining in the province and to repeal Bear Creek's existing concession. They have also threatened to disrupt the upcoming national elections this week by preventing voters from being able to reach their voting stations (Peruvians are legally ... View Post » 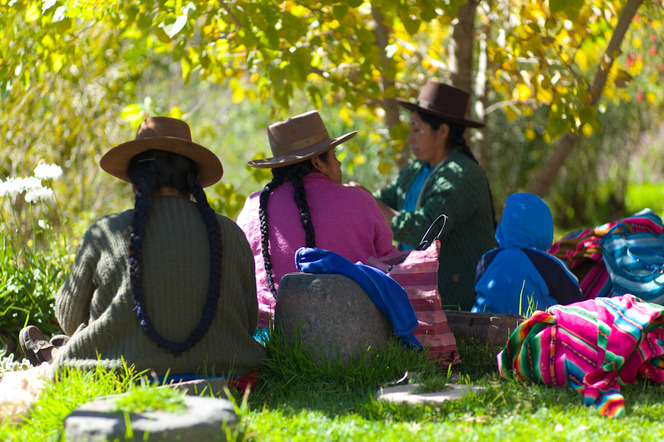 We spent one month in a small town east of Cusco volunteering with a social project, a small doll-making factory which provides jobs to the local women. It was founded on the premise that if you support a woman, you support a whole family. Q'ewar operates for profit, which we liked. Conventional NGO projects commonly have trouble profiting after donor funds run out. In our month there, we discovered a community that supports and builds confidence for women who have anything but easy, stable home lives. View Gallery »

When you only have a rough grasp of the language illustrations are definitely the way to go. (We copied these from a Spanish version of one of Jeavons' books.)

"There's definitely something wronger with you than there is with me"

We've been warned that when you travel for long periods of time, at the end of the day you consume your home country's media like it's nobody's business.

As we have learned, this is true. The sheer volume of Western media here is amazing. There are malls dedicated to the art of pirated DVDs, selling for S/. 3 a piece, each little stand specializing in a different Hollywood genre. Oh, yea, there are some films from other countries, too.

Each cover contains elements of the real along with random names of hollywood actors and directors unrelated to the film in hand. For instance our Sherlock Holmes, which we bought to see how ridiculous the Spanish dub was, was directed by Werner Herzog and in the fine print the cast and original title are from Zombieland. Apparently Mark ... View Story »