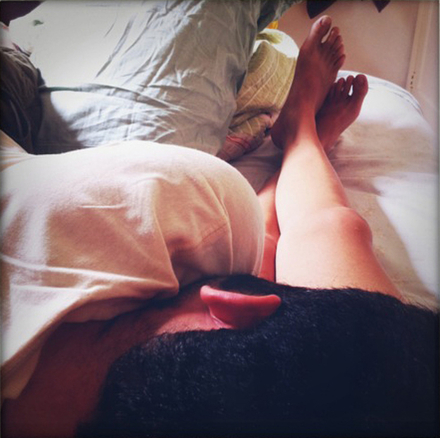 We finally braved the world yesterday after a few days of useless, sick-at-home comatose. In Rio, no doubt! From our wakeup times (a few 10:30ams, 11ams, and one 1:04pm!) you'd think we've been to every Samba club in town. But it has not come to pass…. YET. I am on the recovery end of the spectrum. Happy times. I'm still producing mucus that has an uncanny resemblance to chicken fat and I wake up feeling like I swallowed a toad, but I can walk around and visit the beach and stuff. Fancy that.

Our roommates, the dolls that they are, brought us a few guides books to the city; one that lists out a whole bunch of good Botequins. According to the guide, these botequins are the "bohemian soul" of Rio.

So we curled a bunch of the pages while sitting on the beach, asked for directions numerous times, and found our way to a few. We had excellent bolinhos de bacalhau, or patanicsas as they called them, at Paváo Azul, which the guide helpfully translates into "breaded codfish dollops." Thankfully we already knew what these little croquette balls looked like and they didn't disappoint (but watch out for those bones). 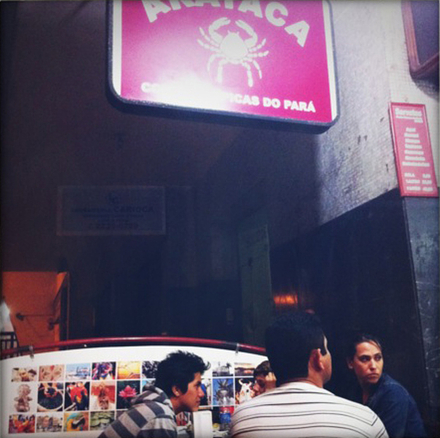 Then we headed to Arataca for a good seafood stew: caranguejo de sururu. There seems to be a surplus of these mangy beach crabs in Brazil. While we've generally tried to avoid them (they're kind of rubbery with not much meat), we can't tell you the number of restaurants that have been recommended to us that have the photo of a crab or their name attributed to one. This stew was actually pretty good with the little shrimps, onion and bell peppers thrown in, but we could have done without the shell bits and the blending (why are there frothy bubbles in my soup?). 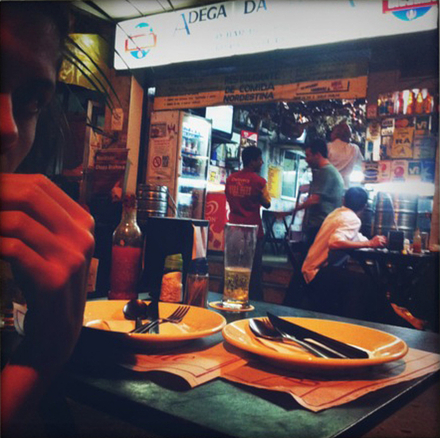 Having had our fill of Copacabana, we headed to Botafogo to a place called Adega da Velha for some costelinha de porco com baião de dois e aipim (pork ribs with beans, rice, and fried cassava). Our little plastic table sat nicely between a street parking sign and a huge sidewalk plant. After our $R13 plate of meat and our chopp - which actually means draft beer, though all over town it only seems to mean the Budweisery Brahma on draft - we headed on our way. 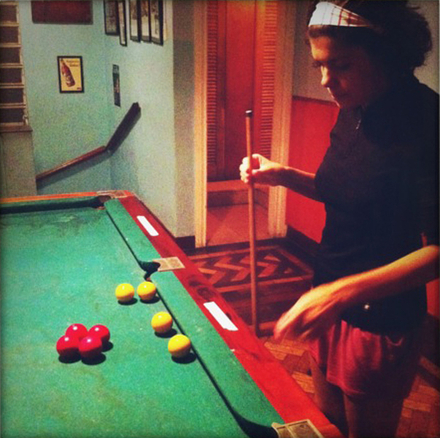 After a bit of a searching around we asked some local college girls and found our way to Salvação to play what we thought was going to be billiards. Turns out the Brazilians play a version of snooker called sinuca or mata mata (kill kill). So we bought two games, put a token in the table and out came these red and yellow balls and one big, fat cue ball. Riiiight. After standing around a bit stupidly with our pool, er, sinuca sticks for a few minutes, a guy approached and asked if he could play after we were done. To which we responded, suuure, we can play doubles with you now if you just show us how to play? What proceeded was a very fun few hours of mata mata played on a completely warped, beer-sloshed, 1/4 sized table with flat-headed sticks. Everyone was mostly awful, but the game was simple and good fun. There was a jumble of Portuguese, Spanish and English and lots of thumbs ups. Good night!