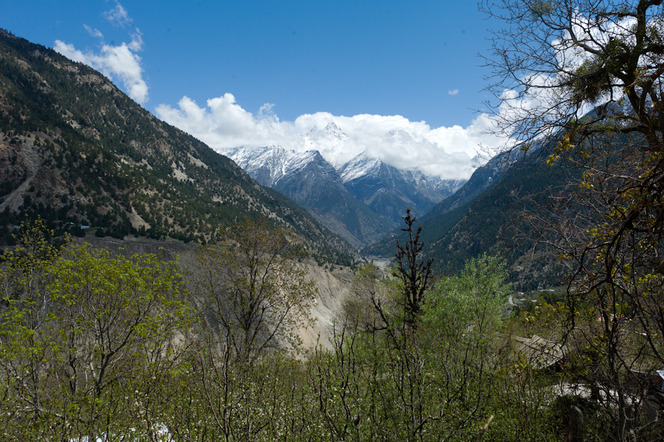 Mountains are elusive features of nature - breathtakingly beautiful yet unknowable, massive and brutal. So it'll come as no surprise that describing a drive on a tiny strip of road meandering and switchbacking through parts of the largest mountain range in the world - the Himalaya Range - is hard to put into words. From every vantage these megaliths change their appearance; with every passing cloud their jagged peaks prove elusive. You could almost say it's maddening to be a human trying to get to know a mountain, let alone a string of them, from a car moving at 15-45 mph. Well, so let's just say this. We spent four precious days being amongst these Indian Himalaya mountains in the state of Himachal Pradesh (HP) in a teeny Maruti Alto with a man named Abhishek.

Most famous for the old summer capital, Shimla (née Simla), the story of modern Himachal Pradesh is the classic tale of a select few harnessing nature's power (in the name of modernity) and subsequently paving over the old ways. Surrounded by disputed borders, including it's own land, the area is criss-crossed with mountains studded with tiny towns that only recently have been connected by military and dam-access roads. The border to China (née Tibet) sits just over the mountains and the disputed land of Kashmir is just next door. Yet the locals continue to live - the farther east you go the more traditionally they do so - keeping their faith in local deities and the military.

Personally, I've always been fascinated by rocks. I aspire, at some point, to know a rock in a way like I know a face. Getting to know the people who live amongst the largest rock piles on earth, well, I consider that a start. By our estimation the local villagers seem to be wise, resilient folks with weathered hands and chiseled, windblown faces; not unlike the rocks themselves. The mountains - massive and tough and in every direction - make you humble. They make you want to know about them. As a Westerner I wonder about their composition, their age, about plate subduction, about hydroelectric power. The military looked up at the mountains and thought, China is right over there. I need to defend this place. I need a road. The dam makers looked down the Sutlej and Spiti rivers, cutting their way through the mountains, and saw immense power. But the folks here seem to look at the mountains in a less divorced, less dominating way. The mountains dictate every aspect of their life. The seasons, the floods, the droughts. They pick its wild pine nuts and hunt its wild goats. They build their houses on the rock faces and make meticulous, terraced gardens to grow their apples. They live off the ice melt and they endure the harsh winters. The mountains for them are something deep and eternal. They signify a greater purpose and elicit prayer.

Our journey in the mountains began on one rainy April day in Shimla. We had been living day-to-day at a very wonderful little hotel, under the guidance of the owner, Arindam, who was gamely helping us make a plan for our tour of HP. A plan which consisted of busing it through these mountains on roads that all the guidebooks we read say will "make your hair stand on end." On that day we hoofed it down to the local bus station, basically a patch of pavement packed with a hodgepodge of government and private buses. We picked out a private one and the money man helped us stuff ourselves into the bench at the back of the bus. We were told it would take about 10 hours to get all the way east in the state to Kalpa, traversing the Indo-Tibetan road.

Taking public transportation in India, whether by car or train or bus, is a self-study of nerves and endurance. If you allow, let's step inside this local Indian mountain bus for a few moments.

In the back of a bus, nothing is stable. There's just a bench and no seats. We find ourselves at the end of a row of five Nepali, smushed against the side of the bus. Matt and I are hip to hip, shifting and jerking backwards and forwards as the bus careens around bends. It feels like an aggressive game of table hockey and we are the puck. The ticket collector goes in and out, slamming the door and blowing his whistle so shrill-ly my ears ache.

As we thrash from side to side, everything follows - my stomach, my mind, my intercostals. Life - the limited one inside the bus - careens around each corner. Being present with this continuously opposing motion means I shift from peaceful to fearful around each bend. At first, I catch the rhythm of the bus, and my body is moving seamlessly. There's no fighting as my torso hovers, fluidly stretching left then right, swaying to the inner music of these hills. The women get on and off, on and off, dressed in their green felted hats and soft, grey cotton pajamas and swathed in earthy woolen cardigans. Each one finds a comfortable stance, their jaws set, eyes down and off we go, marked by the whistle of our ringleader. We move silently as a single unit. The rain spits down, covering this lush mountainside. I sway and stare at the blur of wooly pines and the jagged outlines of shale where the road cuts in.

But serenity doesn't last long on a bus caught in this anxious, perpetual state of improbable physics. We're all assuming the bus driver will keep the bus from doing what it wants to do: namely, drive off the edge of the cliff. And so somewhere along the twists and turns, the driver picks up speed or the road conditions change, and the chaos sets back in. I feel itchy, panicked. I'm frightened for my life. It feels a bit like cheating death. The stink of the bus brings my senses inside. The passengers crowd in all around, sweating, reeking and coughing up phlegm. My body feels jerky and tense. My hips rub into Matt's and I struggle to keep my thighs on the seat. My sides are achy from all the movement. If only I could get off, stop. There isn't enough air to breathe. Should I get off NOW? Where are we? Why won't that man stop coughing! Why is no one else noticing this?! None of these people care, really, if they die. Do they? The bus driver only cares about getting there as fast as possible. I don't NEED to be here. Remind me why I am?

Next to me, Matt's face is twisted into a knot of indecision. I know he's wondering, is it safe? The road is slick, but it's not that slick. It's only spitting. Surely they are used to much worse. But is the road getting worse or is my butt just sore? I can't tell. These roads are poorly maintained and some of them look like they could collapse at any moment. The driver looked sober when we got on. I wish I had checked to see if the tires were bald. Why are we always so fixated on leaving, damnit. Shit, I don't like when he accelerates like that. And why does he HAVE to overtake everyone? Damn, that was close. What would it take to overturn this bus? What was the angle that it takes for a London double decker bus to overturn? I would rather be on a camel than jerk around like this.

We're a sorry sight, the two of us. Our foreign faces all screwed up on this bus of local Indians. It must be amusing, to watch us age in real time. And then, miraculously, I notice a tiny little crack in the window. I remember, I OPENED THE WINDOW. This is my little peep into the outside world. This is my connection to the place I have chosen to venture, to this harsh mountainous land. I stick my face towards the window and take in a deep breath. I open the crack a bit farther. I stick my head outside, like a dog, and breathe as deeply as I can. It's cold and moist and smells of eucalyptus. There's the metallic smell of healthy humis on this misty, rainy morning. The rocky hills are covered in moss and lichen with tufts of long, reedy grass. And the pine. Oh, the pine trees. Some with fuzzy needles, some long and prickly. Some of them shoot out of the ground like flagpoles, some 50 feet high. Slowly, my face starts to prickle, my ears throb, and I reluctantly bring my head back inside the bus. Oh, the bus! Yes, the bus. This wonderful state of perpetual movement from left to right. I sit up tall, swaying along with our rectangle on wheels as it weaves its way along this ribbon of modernity. Life is merry on the bus. You must be fluid and find the rhythm, anticipate the bumps before they happen, follow the terrain with your eyes. It's a bit better than an elephant. It's not walking. Wow, it's hot in here. It smells sort of like perfume and vomit. Wow, phew, that's bad. Why is he picking up speed? Did we just skid? I swear we just skidded! Why is that guy coughing so much and why does he have a scarf wrapped all the way around his head? He sounds like he already vomited his throat out the window. Tuberculosis! OMG!

And on it goes... Well, we only lasted six hours to Rompur. We got off as the rain was coming down a little harder. We were adamant about hiring a 4x4 for the rest of the way until a man named Abhishek, the VP of this small union of 65 cabs, approached us. He had been summoned by his buddies who didn't speak a lick of English, to talk to the foreigners. And he was just the ticket we needed. He knew the roads, knew the area, had his own car. We liked his face, his responses to safety questions and his easy nature. We got in his Maruti Alto and headed for Kalpa. The following morning, we woke up to this...