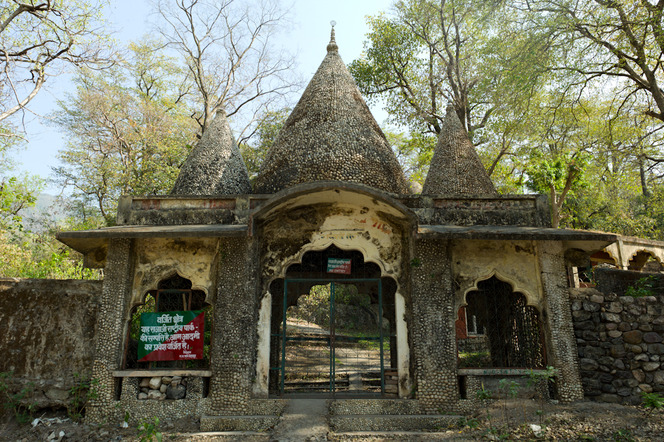 The abandoned Maharishi Mahesh Yogi asham sits on a 14 acre property  (according to Wikipedia) down river of Ram Jhula (the southern of Rishikesh's twin bridges). It's about a 5 minute walk outside the action of the west bank's main street. You enter the grounds around a high wall, some parts enforced by barbed wire through a beautiful gate of three pyramid-shaped structures inlaid with smooth Ganga river stones. To visit, payment is due - 50 rupees a person - to the guards stationed inside from 10am-6:30pm. Inside, the ashram is laid out in a loop, the left hand side hugging the edge of these jungly woods and the right containing wonderful views of the fast flowing Ganga some 150 feet below. As you enter and exit you follow some of the 121 egg-shaped meditation huts, whose doors face east or west in succession.

There's a lot of controversy over just how Maharishi was back in early '68 when The Beatles came to visit. Maharishi was accused of all the exploits that we find commonplace with yogis and gurus these days - greed, sex, fame. But I won't focus on too much speculation here. I'm sure you're all familiar with how to dig up trash on Google. It's the ashram, not so much the controversy that I'm interested in showing you.

For those curious, what is mostly undisputed, is that The Beatles did travel to the ashram in '68, they did learn Transcendental Meditation and they did write much of The White Album and some of Abbey Road while staying on the grounds. "Sexy Sadie" was originally titled "Maharishi", aimed at his alleged seduction of the actress Mia Farrow, but was later changed to avoid a libel suit and maybe from being plain mean. It's speculated that "Bungalow Bill" was written about the son of a visitor who went tiger hunting, "Dear Prudence" was written to try to entice Prudence Farrow out of her 42 hour meditation, and "Why Don't We Do it In the Road" was an inspiration of McCartney's after seeing the free love of monkeys in the ashram. Beatles mania aside, Maharishi's ashram put Rishikesh on the map for foreigners seeking spiritual outlets and is in no small part responsible for the western movement around yoga and meditation today.

I am a sucker for abandoned structures. So it should come as no surprise that exploring the remains of a not so distant time - apart from how depressing it is to find crumbling buildings so commonplace in India -  was exhilarating. You could argue that the facility is on the more elaborate, Western-style side of ashrams out there. But we found it had an incredible atmosphere, even as the woods are re-wilding the buildings. The ashrams we've seen around Rishikesh have been - some decrepit, some partially maintained, but all - blocky cement structures painted in pastel colors. There's little atmosphere or deliberate planning. Of course the idea here is not to get caught up in the surroundings. Still, we were really impressed and excited to see grounds executed with such a clear vision. While much of the paint has worn off, there are traces of bright blues, greens and yellows.

In fact it seems the ashram was architected as a mostly self-contained town. We saw guard towers, a post office, hospital, workshop for making furniture, school, kitchen (that our guide said could cook for 2,000) and a helipad. There was (what we were told) was a waterfall, and we saw the snaking channels of where water used to flow. This is in addition to the fixings of Maharishi's ashram - room for 300 pandits (4 to a room), large yoga hall, many guest quarters of varying sizes with western toilets, a large living quarters for The Beatles and entourage, and 121 igloo-style meditation huts. Then there's Maharishi's house, seated with a beautiful view overlooking the Ganga and Rishikesh, and equipped with a small vault in the basement, a/c, decorative outdoor pools and a private kitchen.

We were told the ashram closed somewhere between 1997-2003, although it seems to never have been intended as a permanent place for Maharishi. Our guide informed us that the land had only been leased by Maharishi from the Forestry Service, and eventually that lease expired. Try, if you will, to transplant yourself here back to the late 60s as a musician on top of the world, searching for meaning and peace. Enjoy!

P.S. Anyone who has more information or has visited the ashram, we'd love to hear from you (you can email us or comment below)!