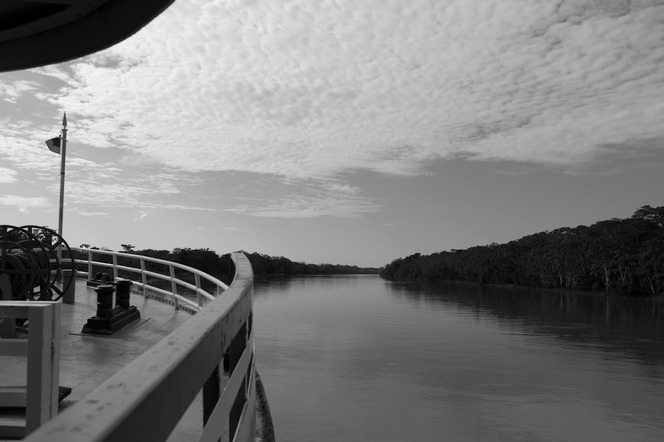 You meet a Spaniard named Guillermo and a Frenchman named Sebastien while you're all attempting to tie the correct knot to string up your hammocks. You talk about traveling and life in broken Spanish, English and French. Of course, the Spaniard has the upper hand here as he speaks both French and English and can understand Portuguese. Also, he's a lawyer and a filmmaker. So you marvel at that. Things are "fucking beautiful" and you like that.

You meet an incredibly friendly Brazilian named Paolo who tells you all these wonderful places to go on the coast in his clear, soft Spanish.

After you've had your fill of rocking and staring at the horizon, you and your new friends get to know this new home. You wander the decks, looking for glimpses of shade with good views. You locate the super sweet coffee dispenser on the cargo deck while also learning that this monster of an engine is fed by a 24 liter plastic jug that needs refilling every hour. You watch kids string together plastic bags that they fly like kites from the stern.

Sometimes it's so hot you can't move, but sitting still you fare no better; it feels like your brain is baking. No words come, so you stare out into the sky, scanning for rainclouds.

At night, if the rain doesn't come, the bugs do. Huge, black beetles with crunchy exteriors and thick legs. If you stick your head out even a few inches they collide with whatever is visible: your face, your shirt, your hair. You hop around, flailing your arms in the darkness and can barely make out others doing the same. You can only tell the size of the beetle when it falls to the ground with a particularly loud thud. The beetles congregate near the light, especially near the television playing the only static channel available. Every twenty minutes someone moves the dish an inch, hoping for more picture, but usually getting less. The bugs find themselves below the TV, many on their backs. How do they get like that?! They flail their fat legs like defenseless babies. Eventually, probably, they die, and are swept up into the trash before morning.

As you settle in and days go by, you do long for more. You hope that something new will happen. You wish you could catch a glimpse of a pink dolphin, a toucan flying over the canopy or a snake lounging on a branch. But no. The river is as wide and endless as ever, unchanging except for passing clouds and the ripple of the water against the wind from an oncoming storm. This constancy is only interrupted when the boat arrives in port.

Each entry into a port town is as exciting for those leaving as those staying on. Everyone rushes to the sides of the boat and peers out at the things being loaded and offloaded. Strange things and everyday things - girls in nighties, their silk slips shimmering before they disappear onto the dock;  enormous sacks of onions completely obstructing view of the carrier; endless crates of soda; people of all different colors of coffee; enormous fish; and whole trees of green plantains. There's always a continuous stream of boxes of all shapes and sizes wrapped over and over in plastic and bulging at their cardboard seams. Their filled with God knows what, making you both curious of their contents and also glad to see them go. Then there's the occasional foreigner and many moms and pops - or moms about to pop - with children swinging off their arms.

The boat is like a sleeping monster who stirs but never wakes. At first the constancy of sounds and vibrations on the boat - especially the humming and growling - is overwhelming. But after a few hours you begin to enjoy it thoroughly and when it stops, you feel as though a part of yourself has stopped along with it. Unconsciously, people all around rise to investigate the sudden quieting of the engine. Adding variety to the din of the engine is the inconsistent bouts of music, of all American epochs (this is de rigeur in South America), coming from a variety of devices, but always played at maximum volume. There's also the intermittent wailing of Brazilian children - although they're not as young as you'd imagine - that is a distinctly different and more piercing sound than the American whine back home.

Passengers inhabit this whirring monster as a continuous mass - also growing and receding - depending on the size of the most recent port. Sometimes it feels like the boat could not possibly fit another hammock, and at others, the holes are like a sad sort of reminder of the finiteness of this otherwise seemingly endless journey. Some passengers are looking to meet others, some want to be left alone to the horizon, and others measure their boredom in empty beer cans (until they lose count).

You come together three times a day in the mouth of the beast (actually there are two), to feed. A long table holding about twenty people (in a room that couldn't hold much more) is dressed and redressed many times in a long, plastic table cloth. Breakfast, lunch and dinner are taken, graciously, in shifts. Those who are particularly hungry line up in anticipation when the bell rings. But the meal is not ready until one of the mamas from the kitchen comes out in her hair net and unlocks the door. Then you enter and collect your blue glass bowl, fork, knife, spoon and plastic cup. Bottles of farinha, really yellow pebbles of sand that were once manioc are located on both ends of the table. Next to them are pitchers of colored, flavored sugar containing just enough water to dissolve it. Other than these curiosities, the meals are excellent. Buttered pasta and beans are frequent staples, but the entree changes from soup to chicken to fish, simply seasoned and well cooked. Meals, in many ways, are the best part of the boat trip: strangers coming together and eating family-style. Because of the desired expediency by the kitchen (and those queued up outside), no one speaks. All twenty are focused, collectively, on the meal. You eat however much you wish. There is always enough, but it doesn't appear as though too much is served. In between the whirring a/c and the noises of the boat you can hear the soft clinking of silverware on glass, and the occasional request for something to be passed or someone's plate to be refilled. Once you've had your fill, you hand your dish to one of the women through the kitchen window. She smiles and you exit out the back door. It's a beautiful, rare moment amongst strangers that passes many times a day on the boat.

At other times of day passengers come together to talk and collectively stare out at the passing river. There's always a mix of different sounds - Portuguese, French, English, Spanish, Japanese - and you find yourself easily borrowing words from whatever seems appropriate. Many times you'll have a conversation where everyone is speaking a different language yet all give collective nods and grunts of understanding. Later, you'll try to remember what someone was speaking in when a story was told - to no avail.

While on the boat the passengers are able to appreciate the natural end to a conversation. Everyone has time to talk, to ask, and to listen. Everyone has time to smile at one another. You notice the comings and goings of your neighbor intimately, even if you don't know them by name. A face becomes much more familiar when you're in such a confined space. You gesture, you nod, you enjoy company; even quiet company. A boat down the Rio Amazona gives you ample opportunity to ponder being tranquilo. You oscillate between ease and agitation, sometimes multiple times a day. Yet the Brazilians seem to take it all in stride. On the final day you ache to be off the boat.

The trip winds down as this boatful of Brazilians begin to present themselves for what awaits them in port. They shower. The men put on too much cologne and the women too much makeup. Mothers and daughters doll themselves up in chunky sandals, stretchy, brightly-colored t-shirts and skin-tight jeans. The surroundings of the boat begin to look like Brazil and less like an island on a river. So you follow along. You change and pack and make the final gesture of pulling down your hammock. The urgency to leave is pulling you. You collect phone numbers and exchange offerings with your fellow passengers to meet up soon. And then it's off to the calamity of the port and the hot, sweaty, dirty expanse of Manaus that has opened up before you. Later, over drinks, you'll reflect on how happy you are for having met all these people and for having a time, even if it was brief, where there was no before or after. There was only your fellow passengers and the Río Amazona.