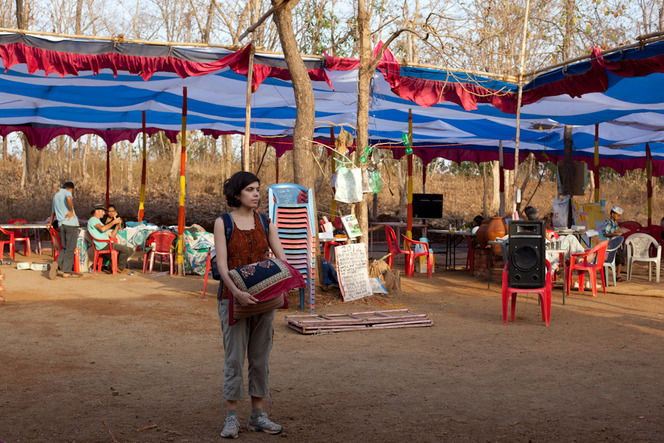 We went to an "unconference" with our yoga teacher, Devang, a few weeks back about two hours outside of Mumbai (read: only about 100km). I wanted to tell you all about it, but, well, I had way too much homework at the time (I think I was memorizing the alphabet or some such) and then, well, I felt like I was in school again!

After a night out meeting expats, we woke up in the wee hours to head out to the main road where Devang would pick us up. We munched some idli w/ molakaipodi in the rickshaw - thanks to Mohana for remembering the world's best travel food. So while we were waiting for our pickup, I jumped on this unattended trampoline, providing free entertainment for all the work-goers. [Oh boy! In the states this trampoline - if left unattended - would have been covered, roped off, chained and equipped with a noise-making security system.]

Devang had tried to rent a car, but couldn't find one for the size we needed, so he brought the family van. He gamely managed the wheel as we bumped our way out of Mumbai, asking for directions from passersby until we finally found the long driveway to our unconference in the midst of the dusty fields of Jhadpoli, Maharashtra.

Makeshift tents had been erected in colorful Indian fashion with fabric ceilings so that everything had a reddish and blueish glow. The conference actually spanned 5 days, and we'd arrived on the 4th day. Devang's father had arrived on the first day, planning to be there for a few hours. He loved the experience so much he was there to meet us four days later with a wide grin and open arms.

After we looked around at the settings of this spontaneous campsite, we signed into the affair, got our nametags, and made to mingle. People were just finishing breakfast and settling in the main meeting tent, so we followed along.

What proceeded was an hour long investigation into what the day's talks would be. The theme of the whole conference was around community, and the theme of the day was focused on communication. For anyone who has been to an unstructured conference in the states, you'll be pretty familiar with the layout. People come together around a theme or group and in real-time assemble topics for discussion. There is no pre-determined schedule and discussions and problem-solving in place of lectures and panels.

Each person presenting came up to the center of the group with a little colored piece of paper, indicating their talk title, time and location. They took the mic and described - in a mix of Hindi and English - what they would talk about. We'd grab onto English words and phrases, but were mostly lost. The English parts tended to be "I'm going to tell you something..." or "My talk is about..." and then immediately after they'd switch into Hindi. As a result, we felt we were being promised a lot, but had no idea what exactly the promises were. Thankfully a friendly American (who said she was from Montana or Chicago), helped translate the gists for us. Through this we learned the topics were anywhere from "Music 101" to "Love Letter Writing" to "Bicycle Yatra." Then a burly European got up - one westerner of about four, including us, in a group of 150 Indians from all over. He said he was going to teach some balancing poses and explain how imbalance led to the economic downturn.

Before the break there was a group discussion, a meta meta discussion, on how the community of the unconference community was going. We were able to witness an amusing role play of Indians depicted complaining about the food that was being served. One guy received his imaginary chapatis and then threw them in the trash. Another dumped her chole because it was too spicy. Another complained she just could not live without chai. After this meta community discussion we all broke for the proposed discussion.

We would definitely have been game for standing on one leg. But I'd injured myself - I have no idea how - a few days prior, and had a pretty severe crick in my hip that was causing a lot of shooting pain. So instead, Matt wandered around with me as I carried a pillow to plant my butt on.

Instead we visited an interesting talk on cycle yatras. The speaker, Ram, had organized many pilgrimages from town to town in different regions. His followers - presumably young urbanites - would join a group and travel from town to town to spend a night with the locals in exchange for a day's worth of work. The philosophy was that modern NGOs don't work. Instead of "helping" villagers with charity, Ram said, it is better to try and learn from them. Villagers have retained a lot of ancient wisdom that will be lost unless a larger community wants to gain the knowledge. Ram said part of the philosophy was to try and not expose the locals to capitalism - they brought no money, cell phones, cameras, dressed in local materials, and even left their Indian ID cards behind.

It was an interesting tenant and something we resonated with. Yet we couldn't help feel that this way of traveling from place to place, working one day at a time with presumably no local skills, offered much more value to urban kids than the villagers. Still, it gave us food for thought.

There were many more discussions, some breaks for eating, and some napping late in the afternoon. Through it all, we noticed how engaged this Indian community was with the topics discussed. While we felt we were witnessing a rather unstructured version of what we'd seen in the states many times over, we realized that here, people were getting a lot out of it. In a country with so much bureaucracy and so many social rules, it's refreshing to see a group of people engaged in creative brainstorming about their community. These discussions are just the beginnings.

After the yatraing we were feeling like a walk. We ambled down the dirt road out of the conference to get a look around at the local life. Here is some of what we saw...